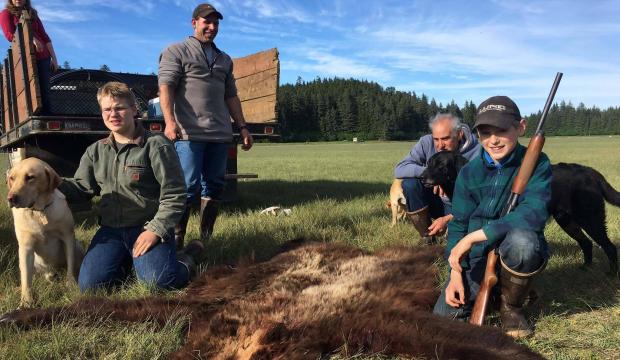 “There was four of them in a line … my son was third,” Clark said. “The bear came down the trail at them, fella in the front, who was his uncle, the bear was on him so quickly that he didn’t have time to take his rifle off his shoulder.”The bear ran through the first two men, who were pushed to the side of the trail, leaving Elliot Clark in front of his unarmed cousin. The boy raised his pump action shotgun and shot the sow, hitting it with birdshot, which is often used just to scare bears off, Lucas Clark said.“His first shot was a light load of birdshot. That first shot hit him in the shoulder and did absolutely nothing. The next shot hit him in the nose and traveled down through the neck,” Lucas Clark said.The third shot went into the bear’s shoulder and his back, dropping it to the ground. The bear was so close when Elliot hit it with his third shot, there were powder burns on the bear’s mouth. Still alive, the bear then slid by Elliot’s feet.“As the bear slid past him and came to a stop, he put a kill shot it him,” Lucas Clark said.Stoltzfus finished it off with another round.The moment could have turned out differently. Lucas Clark hadn’t gotten around to putting a sling on his son’s shotgun, leaving the 11-year-old to carry it in his hands. He credits this and a lot of shooting practice with preparing Elliot for the moment.“He was carrying it in his hands rather than on his shoulder. That was the problem with the other ones, when the bear came at his uncle, he had his rifle on his shoulder and the bear was very close, so he couldn’t get it off in time,” Lucas Clark said.Just the day before, Elliot still had a plug in his shotgun, meaning his gun only carried three rounds: the “topround” of birdshot and two slugs. He had taken the plug out the day before, Lucas Clark said, after calling his father to ask permission to do so.The family had seen bear in the area for a few days, and had been carrying guns for protection.