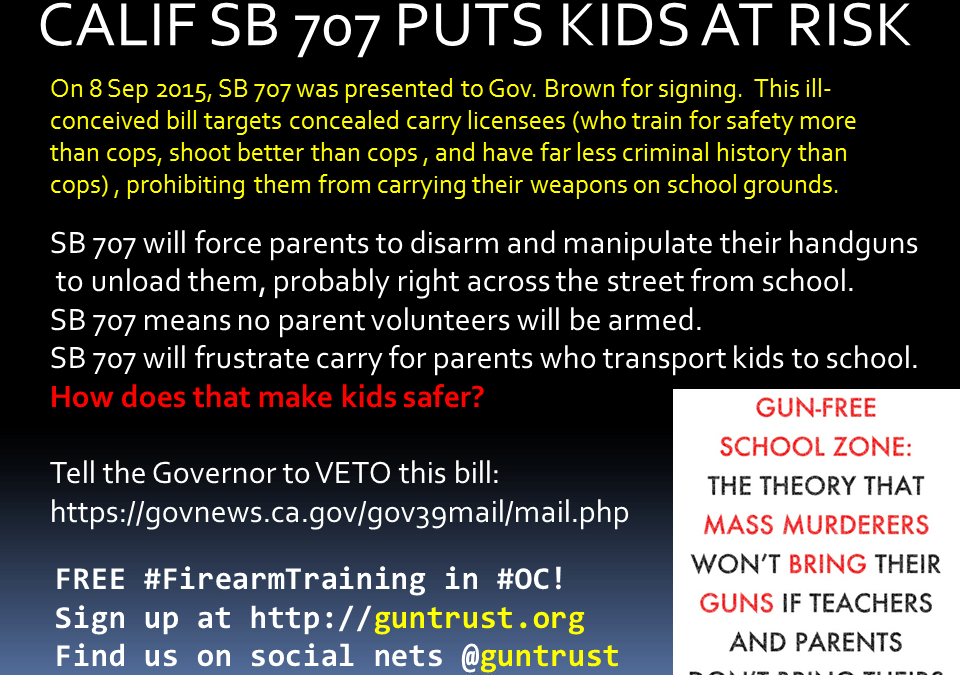 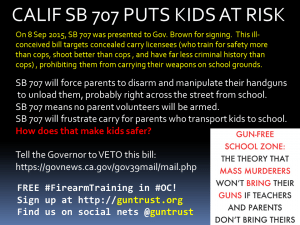 On 8 Sep 2015, SB 707 was presented to Gov. Brown for signing.  This ill-conceived bill targets concealed carry licensees (who train for safety more than cops, shoot better than cops , and have far less criminal history than cops) , prohibiting them from carrying their weapons on school grounds.

[A little deja vu here–the General Counsel of the Diocese of Orange County, during an inquisition in front of my parish pastor and OCSD when my daughter was in kindergarten, accused me of carrying on campus, which she supposed to be a felony, and threatened to have me disbarred. I explained to her that under Penal Code section 626.9(l) CCW licensees are exempt, but she stated to everyone in the room that section was “overruled by case law”–so why, nine years later, is there a bill on the governor’s desk to outlaw school carry by CCW licensees?? Hmmm?? And what did the Diocese want from me? They wanted me to sign a statement that I would not carry on campus. Wow. I countered, telling them I would if they signed a statement saying they are capable of protecting students from criminal violence. ***THEY REFUSED TO DO SO!***  I folded and gave them the statement they requested, to avoid the implied threat against my daughter’s continued enrollment.]

SB 707 will force parents to disarm and manipulate their handguns
to unload them, probably right across the street from school.
SB 707 means no parent volunteers will be armed.
SB 707 will frustrate carry for parents who transport kids to school.
How does that make kids safer?

Tell the Governor to VETO this bill:
https://govnews.ca.gov/gov39mail/mail.php

FREE #FirearmTraining in #OC!
Sign up at http://guntrust.org
Find us on social nets @guntrust