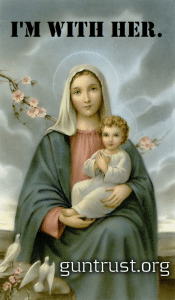 Emails and vulgar language pale in significance to the prospect of keeping one’s family safe. These are the millions of voters who may well have been ignored by pollsters who haven’t seen the wave of “guntry clubs” being built, the families shooting together, the women taking advanced classes in personal protection and gun fighting.

These are the men and women of Donald Trump’s silent, armed, army. They will vote. They will act to retain control of their own safety.