George Washington’s Last Will and Testament 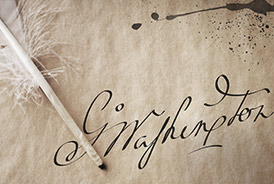 Washington is known as the only founding father who emancipated all of his slaves, but actually he only emancipated one outright. His slaves had intermarried with Martha’s dower slaves, in whom Martha had only a life estate because her first husband died without a will. Martha’s slaves would thus go to her grandchildren at her death, so she was powerless to manumit them. To avoid or at least delay breakup of these slave families, now intermarried, Washington gave his slaves to Martha on condition his slaves be freed only upon her death. Though well intended, this provision sort of gave Martha the willies and made her fear for her safety such that she quickly arranged for the emancipation of Washington’s slaves during her life. Therefore, Washington’s plan failed to some extent, though you can’t blame Martha. (You may, however, see an analogy between these rather antiquated circumstances and the serious dilemmas facing the modern blended family where the surviving spouse, for example, can completely change his or her will, disinheriting the kids of the other spouse.)

George Washington prepared his will alone, without, as he attested, any “professional character” being “consulted” or having “any Agency in the draught.” He dated the will, the work of many “leisure hours,” the “ninth day of July” in 1799, probably the date that he finished making the final copy. And he put his name at […]

Source: George Washington’s Last Will and Testament – The Washington Papers