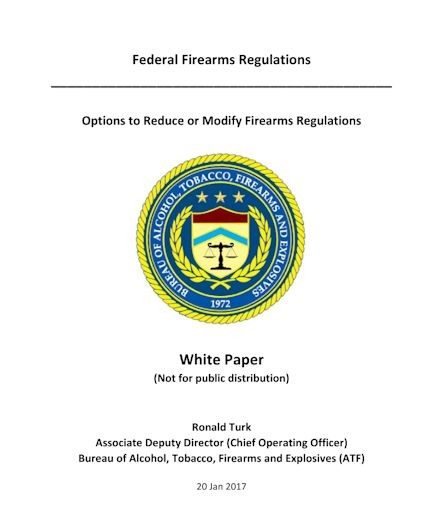 A leaked white paper by Ronald Turk, second in command at ATF, advocates cutting back gun regulations in a number of areas out of both respect for the Second Amendment and also improving the ATF’s mission of fighting crime.

Among his many ideas are repealing the prohibition of silencers under NFA, and issuing a new “sporting purpose” study as restrictions on importation of “modern sporting rifles” such as the AR-15 no longer make sense given the vast increase in popularity of such rifles over the last couple decades since importation was banned by the elder Bush.

This excerpt from the white paper addresses the study of sporting purpose:

Reissue a New Sporting Purpose Study: Since the sunset of the Assault Weapons ban in
2004, the use of AR-15s, AK-style, and similar rifles now commonly referred to as
“modern sporting rifles” has increased exponentially in sport shooting. These firearm
types are now standard for hunting activities. ATF could re-examine its almost 20-yearold
study to bring it up to date with the sport shooting landscape of today, which is
vastly different than what it was years ago. Action shooting sports and organizations
such as 3 Gun and the United States Practical Shooting Association (USPSA) have also
drastically expanded in recent years. Restriction on imports serves questionable public
safety interests, as these rifles are already generally legally available for manufacture
and ownership in the United States. Low cost foreign made firearms are also still
imported and converted into “non-sporting” configurations. These restrictions have
placed many limitations on importers, while at the same time imposing a heavy workload on ATF’s Firearms and Ammunition Technology Division. ATF’s Imports Branch
also possesses a list of firearms approved for import but has not made this list public.
Lists such as this can be made available to the public so that the importing community
does not have to guess as to what the standard for importation is. Many concerns from
the firearms industry could be re-examined through the publication of a new Sporting
Purpose Study along with an updated Imports Branch Guide.

Silencers: Current Federal law requires ATF to regulate silencers under the NFA. This
requires a Federal tax payment of $200 for transfers, ATF approval, and entry of the
silencer into a national NFA database. In the past several years, opinions about silencers
have changed across the United States. Their use to reduce noise at shooting ranges
and applications within the sporting and hunting industry are now well recognized. At
present, 42 states generally allow silencers to be used for sporting purposes. The wide
acceptance of silencers and corresponding changes in state laws have created
substantial demand across the country. This surge in demand has caused ATF to have a
significant backlog on silencer applications. ATF’s processing time is now approximately
8 months. ATF has devoted substantial resources in attempts to reduce processing
times, spending over $1 million annually in overtime and temporary duty expenses, and
dedicating over 33 additional full-time and contract positions since 2011 to support NFA
processing. Despite these efforts, NFA processing times are widely viewed by applicants
and the industry as far too long, resulting in numerous complaints to Congress. Since
silencers account for the vast majority of NFA applications, the most direct way to
reduce processing times is to reduce the number of silencer applications. In light of the
expanding demand and acceptance of silencers, however, that volume is unlikely to
diminish unless they are removed from the NFA. While DOJ and ATF have historically
not supported removal of items from the NFA, the change in public acceptance of
silencers arguably indicates that the reason for their inclusion in the NFA is archaic and
historical reluctance to removing them from the NFA should be reevaluated. ATF’s
experience with the criminal use of silencers also supports reassessing their inclusion in
the NFA. On average in the past 10 years, ATF has only recommended 44 defendants a
year for prosecution on silencer-related violations; of those, only approximately 6 of the
defendants had prior felony convictions. Moreover, consistent with this low number of
prosecution referrals, silencers are very rarely used in criminal shootings. Given the lack
of criminality associated with silencers, it is reasonable to conclude that they should not be viewed as a threat to public safety necessitating NFA classification, and should be
considered for reclassification under the GCA.
If such a change were to be considered, a revision in the definition of a silencer would
be important. The current definition of a silencer extends to “any combination of
[silencer] parts,” as well as “any part intended only for use in” a silencer. Compared to
the definition of a firearm, which specifies the frame or receiver is the key regulated
part, any individual silencer part is generally regulated just as if it were a completed
silencer. Revising the definition could eliminate many of the current issues encountered
by silencer manufacturers and their parts suppliers. Specifically, clarifying when a part
or combination of parts meets a minimum threshold requiring serialization would be
useful.

You can view the original white paper here.