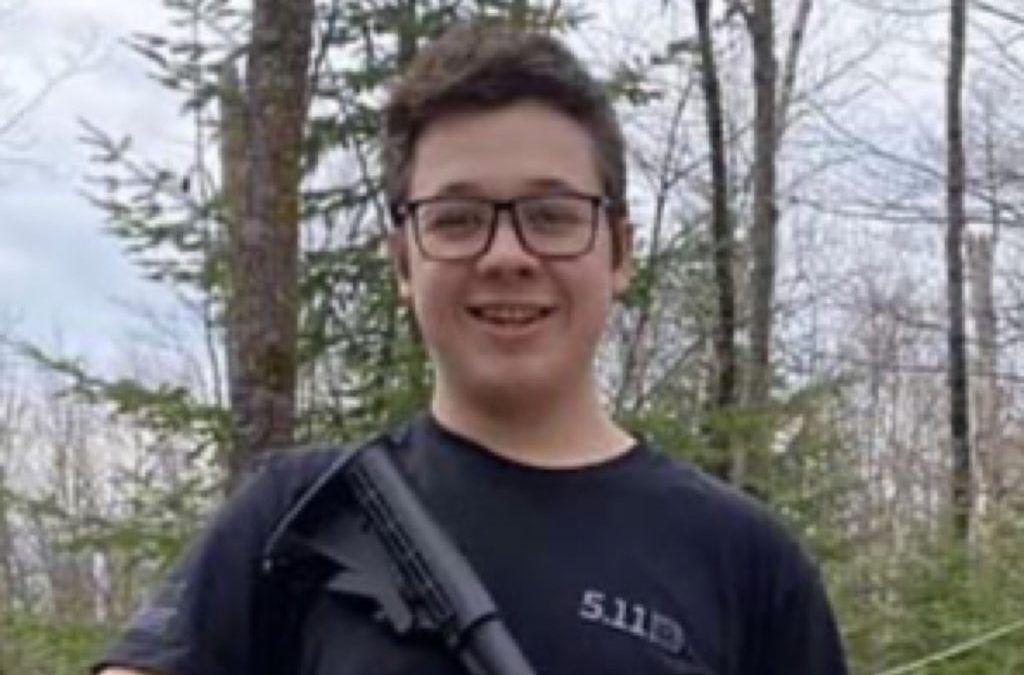 [For other examples of kids using guns in self-defense, click here.]

Kyle is being charged, purely out of political expediency, despite ample video evidence of valid cause for self-defense in each of the three shootings.

Kyle is a lifeguard who showed up to help protect a local business, and brought with him a first aid kit to help any wounded persons.

The first guy he shot (and killed), reportedly a convicted pedophile, tried to provoke Kyle (or Kyle’s group) into shooting him and then ran after Kyle, threw something heavy at Kyle (itself a deadly weapon), and lunged toward Kyle. If the attacker wasn’t armed at that point, he would have been if he had taken Kyle’s gun. The attacker knew Kyle had a long gun, and Kyle could reasonably infer that the attacker’s advance toward him meant that the attacker intended to overcome his defenses, possibly shooting Kyle with his own gun. Kyle was attempting to flee and had no choice but to fire.

Kyle briefly tried to help save the first guy he shot, but then had to flee again down the street as others chased him. Kyle tripped and while on the ground was stomped and kicked, hit with a skateboard in the neck/head, and a pistol was pointed at him, all within a span of seconds by multiple attackers from the mob chasing him. Kyle fired several shots, killing the skateboard wielder, and maiming the pistolero’s arm. While ot may seem Kyle fired rapidly, Kyle’s shots were actually slow and deliberate under the circumstances. (While the best I’ve been able to manage with handgun is .25 seconds; .2 or better is not uncommon with competitive shooters.) Kyle did not fire indiscriminately, but only in self-defense, all while he was attempting to flee toward police positions.

Kyle’s innocence is shown in the videos as he is constantly fleeing from attackers, but if there were any doubt as to the initial aggressor, Kyle can probably use prior bad acts (apparently all three persons he shot had criminal convictions, some involving violence) as evidence they were initial aggressor.

You can read his attorneys’ statement below.

VERNON HILLS, ILLINOIS / August 28, 2020 / Pierce Bainbridge is honored to represent 17-year old Antioch, Illinois resident Kyle Rittenhouse, who has suddenly found himself at the center of a national firestorm and charged with murder after defending himself from a relentless, vicious and potentially deadly mob attack in Kenosha, Wisconsin.

On August 25th, 2020, Kenosha spiraled into chaos following the Jacob Blake shooting. The Kenosha Mayor and Wisconsin Governor failed to provide a basic degree of law and order to protect the citizens and community buildings in Kenosha. The city burned as mobs destroyed buildings and property, and looters stole whatever they wanted. Rioters defaced storefronts, the courthouse, and many other public and private locations across the city.

After Kyle finished his work that day as a community lifeguard in Kenosha, he wanted to help clean up some of the damage, so he and a friend went to the local public high school to remove graffiti by rioters. Later in the day, they received information about a call for help from a local business owner, whose downtown Kenosha auto dealership was largely destroyed by mob violence. The business owner needed help to protect what he had left of his life’s work, including two nearby mechanic’s shops. Kyle and a friend armed themselves with rifles due to the deadly violence gripping Kenosha and many other American cities, and headed to the business premises. The weapons were in Wisconsin and never crossed state lines.

Upon arrival, Kyle and others stood guard at the mechanic’s shop across from the auto dealership to prevent further damage or destruction. Later that night, substantially after the city’s 8:00 p.m. curfew expired without consequence, the police finally started to attempt to disperse a group of rioters. In doing so, they maneuvered a mass of individuals down the street towards the auto shops. Kyle and others on the premises were verbally threatened and taunted multiple times as the rioters passed by, but Kyle never reacted. His intent was not to incite violence, but simply to deter property damage and use his training to provide first aid to injured community members.

After the crowd passed the premises and Kyle believed the threat of further destruction had passed, he became increasingly concerned with the injured protestors and bystanders congregating at a nearby gas station with no immediate access to medical assistance or help from law enforcement. Kyle headed in that direction with a first aid kit. He sought out injured persons, rendered aid, and tried to guide people to others who could assist to the extent he could do so amid the chaos. By the final time Kyle returned to 2 the gas station and confirmed there were no more injured individuals who needed assistance, police had advanced their formation and blocked what would have been his path back to the mechanic’s shop. Kyle then complied with the police instructions not to go back there. Kyle returned to the gas station until he learned of a need to help protect the second mechanic’s shop further down the street where property destruction was imminent with no police were nearby.

As Kyle proceeded towards the second mechanic’s shop, he was accosted by multiple rioters who recognized that he had been attempting to protect a business the mob wanted to destroy. This outraged the rioters and created a mob now determined to hurt Kyle. They began chasing him down. Kyle attempted to get away, but he could not do so quickly enough. Upon the sound of a gunshot behind him, Kyle turned and was immediately faced with an attacker lunging towards him and reaching for his rifle. He reacted instantaneously and justifiably with his weapon to protect himself, firing and striking the attacker.

Kyle stopped to ensure care for the wounded attacker but faced a growing mob gesturing towards him. He realized he needed to flee for his safety and his survival. Another attacker struck Kyle from behind as he fled down the street. Kyle turned as the mob pressed in on him and he fell to the ground. One attacker kicked Kyle on the ground while he was on the ground. Yet another bashed him over the head with a skateboard. Several rioters tried to disarm Kyle. In fear for his life and concerned the crowd would either continue to shoot at him or even use his own weapon against him, Kyle had no choice but to fire multiple rounds towards his immediate attackers, striking two, including one armed attacker. The rest of the mob began to disperse upon hearing the additional gunshots.

Kyle got up and continued down the street in the direction of police with his hands in the air. He attempted to contact multiple police officers, but they were more concerned with the wounded attackers. The police did not take Kyle into custody at that time, but instead they indicated he should keep moving. He fully cooperated, both then and later that night when he turned himself in to the police in his hometown, Antioch, Illinois.

Kyle did nothing wrong. He exercised his God-given, Constitutional, common law and statutory law right to self-defense.

However, in a reactionary rush to appease the divisive, destructive forces currently roiling this country, prosecutors in Kenosha did not engage in any meaningful analysis of the facts, or any in-depth review of available video footage (some of which shows that a critical state’s witness was not even at the area where the shots were fired); this was not a serious investigation. Rather, after learning Kyle may have had conservative political viewpoints, they immediately saw him as a convenient target who they could use as a scapegoat to distract from the Jacob Blake shooting and the government’s abject failure to ensure basic law and order to citizens. Within 24-36 hours, he was charged with multiple homicide counts.

Today, his legal team was successful in working with the public defender to obtain a several-week continuance of his extradition hearing to September 25th. This at least partially slows down the rush to judgment by a government and media that is determined to assassinate his character and destroy his life.

Kyle, his family, the team at Pierce Bainbridge and his other lawyers intend to fight these charges every step of the way, take the case to trial and win an acquittal on the grounds of self-defense before a jury of his peers.

The legal fees and other costs of Kyle’s defense will be provided through donations to #FightBack Foundation Inc., a Texas 501(c)(4) foundation created by John Pierce and Lin Wood to protect lawabiding American citizens whose rights are being trampled on by state and local governments that are more concerned with appeasing mobs than protecting those rights.

Pierce Bainbridge founder John Pierce praised Kyle’s strength and resilience. “A 17-year old child should not have to take up arms in America to protect life and property. That is the job of state and local governments. However, those governments have failed, and law-abiding citizens have no choice but to protect their own communities as their forefathers did at Lexington and Concord in 1775. Kyle is not a racist or a white supremacist. He is a brave, patriotic, compassionate law-abiding American who loves his country and his community. He did nothing wrong. He defended himself, which is a fundamental right of all Americans given by God and protected by law. He is now in the crosshairs of institutional forces that are much more powerful than him. But he will stand up to them and fight not only for himself, but for all Americans and their beloved Constitution. We will never leave his side until he is victorious in that fight.”

Further updates will be provided as the investigation and legal proceedings unfold.