Maloperative phrase in the above quote: “some guests” 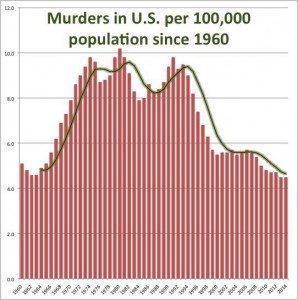 As concealed carry has expanded, the murder rate has dropped dramatically.

The metal detector checks are RANDOM. Disneyland recognizes the enormous popularity of gun culture throughout the country that supplies its tourists, and doesn’t want to offend them TOO much:

Since 2007, the number of concealed handgun permits has soared from 4.6 million to over 12.8 million, and murder rates have fallen from 5.6 killings per 100,000 people to just 4.2, about a 25 percent drop, according to the report from the Crime Prevention Research Center.

So Disneyland will rely on some profiling, a little luck and some bibbidi-bobbidi-boo to determine which attendees present a real threat. Trouble is, when it comes to terrorism, unless you have COMPLETE SECURITY, you have NO SECURITY.  This was recognized by Interpol Secretary General Ronald Noble several years ago when he suggested using armed citizens to strengthen the many soft targets throughout society:

“Societies have to think about how they’re going to approach the problem,” Noble said. “One is to say we want an armed citizenry; you can see the reason for that. Another is to say the enclaves are so secure that in order to get into the soft target you’re going to have to pass through extraordinary security.”

Disney appears to differ with the Interpol chief:

But the thingmabob that does the job is
bibbidi-bobbidi-boo. 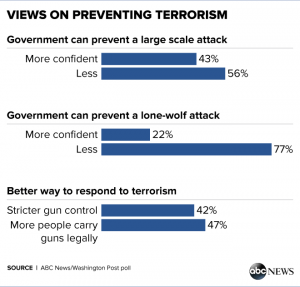 The public trusts concealed carry more than government as the way to stop terror.

But the public seems to be coming around to the Interpol chief’s way of looking at things. A new poll by ABC News / Washington Post shows Americans trust concealed carry permit holders more than gun control as a way to stop terror.

Experience has unfortunately taught us that metal detectors do not prevent attack. For example, in the Red Lake Massacre a lone shooter used a shotgun to blow right through two security guards manning metal detectors at a Minnesota school. What could a good Muslim member of an organized terror cell do to bypass such a system? Well, lots:

Oops..a reader points out I missed one:

.@guntrust You miss another important point-why wait until inside?! A whacko has a target-rich environ at the packed, lined up entrance!

The chilling effect of this type of screening is felt way beyond Disneyland. The combined effect of Sacramento’s new law banning concealed carry of handguns at schools even with permit (effective 1/1/2016), together with the increasing trend of private venues such as Disneyland adopting screening measures aggressive enough to frustrate carry by peaceable citizens but inadequate to stop determined terrorists, is to put us all at greater risk because less people will be carrying. 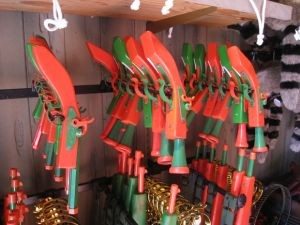 And what of Disneyland’s decision to discontinue sale of toy guns in order to “lessen confusion” of its security officials. Are these so-called experts really so confused as they rush in with firepower to a situation unknown to them? If so, doesn’t that bolster the case of the Interpol chief when he says that the best first responder may be the armed parent standing in a crowd ten feet from the attacker, trained to kneel for safe upward trajectory as he delivers the recommended single dose of lead to the attacker’s cranio-ocular cavity? [Yes, millions of parents around the country have received such training and practice it regularly and those who don’t tend to avoid carrying even if they have a permit. The really dangerous are those who buy a gun and just stick it in a drawer without getting trained (or who wear a badge and meet only the minimum training requirements), but you won’t find them carrying at Disneyland.]

I carried at Disneyland for years. I carried safely, responsibly and carefully just as I would anywhere in public, especially where children are present, such as a theater or mall. But frankly my entire family has grown bored of too much standing in line at Disneyland. And for that kind of money, Coto de Caza Golf & Racquet Club is a much better investment of our entertainment dollar. An even better deal is the unlimited training included with our membership at another country club called Front Sight Firearms Training Institute (some also call it the “Disneyland for Gun Owners”), and you can get free training at this largest of all gun schools by simply attending my estate planning seminar. Here are some pics of my daughter taking the adult handgun class there when she turned 11 (now at 14 she trains with her AR):

And of course, there are many cases in which children actually do use real guns to defend themselves and their families:

Children defend themselves with firearms more often than many realize.

If parents will not recognize their responsibility of being first responders to protect their children (and cease patronizing establishments that interfere with their ability to do so), then perhaps we should let the kids protect themselves.

Or at least train them to carry on the firearm legacy: http://SacredHonor.us

If you must go to Disneyland, be sure to spend some time at the Frontierland shooting gallery. Last I checked, the third rifle from the right still allows unlimited firing without quarters (no bang, but the IR laser works repeatedly).