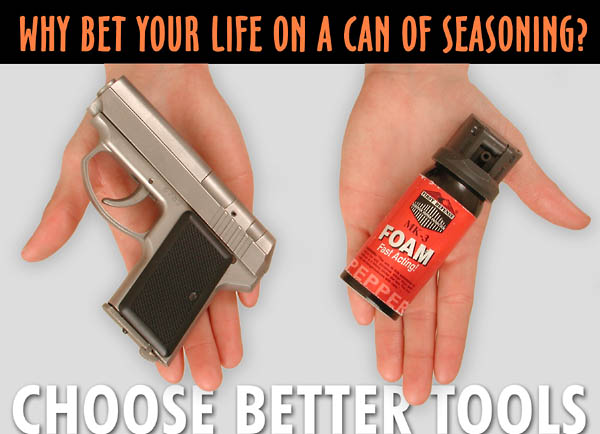 Seems like everyone these days is hawking self-defense products, and not all of these salesmen are friendly toward gun rights. The sad reality is that many of these purveyors of pepper spray are pacifist-aggressive, anti-gun activists, intent on spreading propaganda disguised by a thin veneer of concern for victims. Vulnerable women are convinced they can defend themselves adequately without a gun, simply with pepper spray or a swift kick to the groin, as these charlatans laugh all the way to the bank. In self-defense, as with estate planning, you have to watch out for those who will try to sell you a bill of goods, over-promising on what their cheap product can deliver. When it comes to protecting yourself and your family, there is no substitute for training.

[bctt tweet=”Vulnerable women are convinced they can defend themselves adequately without a gun, with pepper spray” username=”guntrust”]

Facts are stubborn things, and the facts (from a study commissioned by Obama’s own CDC) say: “Studies that directly assessed the effect of actual defensive uses of guns (i.e., incidents in which a gun was ‘used’ by the crime victim in the sense of attacking or threatening an offender) have found consistently lower injury rates among gun-using crime victims compared with victims who used other self-protective strategies.”((See pp. 15-16 of the CDC study, entitled “Priorities For Research to Reduce the Threat of Firearm-Related Violence,” by the Institute of Medicine and the National Research Council.))

That’s not to say pepper spray has no value, but its value must be objectively assessed and the limits of pepper spray must be fully understood by anyone considering it as a self-defense option. Too many pepper spray purchasers are not willing to look at the subject objectively. They may not be willing to even consider using guns, and may even proudly proclaim they could “never” take a human life. [Really? They would never use lethal force to protect their own child? Moreover, private citizens training with guns do not train to take life — they shoot to STOP, not to kill. And guns are not as lethal((Id., at p. 13: “In 2010, there were twice as many nonfatal firearm-related injuries (73,505) as deaths.”)) as many suppose based on what they see on TV.] Pepper spray in a way has become a political statement for them, as guns are for some of us who believe in personal freedom. These people are as irresponsible with their pepper spray as the gun owner who never trains, sticks the gun in a nightstand and expects it to protect him like a magical talisman.

[bctt tweet=”OC is PC: pepper spray is the polite weapon for those who think all guns are assault weapons.” username=”guntrust”]

For some (teenage girls, for example), pepper spray may be all they can legally carry. In California, kids can’t even carry pepper spray prior to age 16.((This foolish law disregards the many examples of kids using actual firearms to defend themselves and their families.))

[bctt tweet=”Teenage girls can only carry pepper spray, and not even that until they are 16″ username=”guntrust”]

And there are certain people out there who will never get the training necessary to responsibly use a gun for self-defense. This type of person often has a bad driving record, which is one of the things agencies look at in issuing concealed carry licenses. Some people should have neither guns nor cars.

[bctt tweet=”Some people should have neither guns nor cars.” username=”guntrust”]

For the 16.3 million Americans with a concealed handgun permit, pepper spray can be a valuable backup weapon. Gun trainers like to say: “If you are not sure whether you should shoot, you probably should not shoot.” Pepper spray can be a useful option in a situation where you cannot be certain of escaping, yet you cannot be certain that shooting is necessary.  I was in such a situation without pepper spray back in 2009, when I drew on someone at my office building; but everything turned out ok. I was lucky — while in the vast majority of defensive gun use cases((Estimates range from 70% to 98%.)) simply presenting the gun is sufficient to stop an attack, it wasn’t in my case. The crazy Muslim (I didn’t know he was Muslim at the time) kept coming toward me until I improved my own demeanor in order to be taken more seriously.((Most instructors and cops I know tell me I acted properly, drawing to a defensive ready position. At that time, I had no training in “sul” position and though that might have helped avoid some confusion with local cops, who were never routed my 911 call which went to CHP but were instead arriving in response to other calls from the building about my gun, I was only able to stop my opponent from advancing toward me by improving my own aggressive demeanor, actually halting my withdrawal as I shouted that I was withdrawing, and improving my ready position — for example, by dropping the phone and useless 911 — to make it clear that I really, really was ready and close to firing (and I was). Yes, it is nice to have options and with pepper spray I might have turned and run sooner (though I believe I also would have drawn to ready with both gun and pepper spray, in Harries position).))

[bctt tweet=”Pepper spray can be a valuable backup weapon.” username=”guntrust”]

There are drawbacks to carrying pepper spray and limitations to its effectiveness that must be kept in mind. To begin with, it’s added equipment that takes up limited space and when you are carrying a concealed gun you have to be concerned about limited real estate. (Make sure you carry the pepper spray on your support side, to leave firing side free for handling firearm if needed.) Next, you have to train well to know when you are going to draw only pepper spray, knowing all of its limitations, instead of the much more effective handgun. Perhaps you will train to present both together with a Harries-like technique. (Harries was developed for drawing a flashlight together with a handgun.)

[bctt tweet=”Make sure you carry pepper spray on your support side, not firing side.” username=”guntrust”]

What are the limitations of pepper spray?

That last point is very concerning. Use of pepper spray could actually escalate a non-lethal encounter into something much worse, depending on a number of factors.

[bctt tweet=”Pepper spray could actually escalate a non-lethal encounter into something much worse.” username=”guntrust”]

So to recapitulate — when choosing NOT to capitulate: