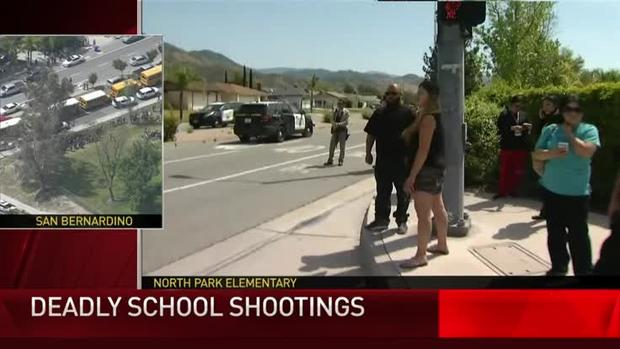 UPDATE: One of the kids died, so MORE blood on the gun grabbers’ hands. Some sort of domestic dispute between the teacher and her husband who easily entered the school with a concealed handgun because “concealed is concealed” and apparently gun-grabbing libtards do not know that or, more likely, since no one could be that stupid, simply do not care. Oh, and the police response time was SEVEN MINUTES. Thank God this guy was only shooting at the teacher. Metal detectors are cost prohibitive, and as noted below are far from foolproof. The ONLY thing that would have saved this teacher and the collaterally and fatally damaged young boy was for that teacher to have been armed.

The minions of the Left just have no clue, and kids are shot as a result.

Recently the Pro-Crime Left banned CCW licensees from carrying handguns on campus. Could an armed parent or teacher have stopped this? Certainly the teacher who was shot here would have had a better chance.

You might assume since the state banned CCW at schools, that it at least had metal detectors. You would be wrong. Just listen to the reporter’s questions in the video. Was the handgun seen as the suspect entered campus? (Have you heard of concealed carry?) Were there metal detectors? (Metal detectors are no guarantee of safety — a shooter at Red Lake, MN, just blew through the detector and guard with a shotgun and entered the school for more mayhem.) Campus security is a joke — my wife and I have accessed our daughter’s school several times without security checks. The guarantee of security is a fraud on parents.

CCW licensees are banned from carrying on campus despite there not ever being a single instance of a problem with a CCW licensee.

I’m willing to bet this shooter turns out to be prohibited from even owning a gun, and a card-carrying socialist-atheist Democrat to boot. UPDATE: Apparently not atheist at least, based on Facebook posts — shooter had some kind of psychiatric problems from head injury at work. Tragic.

Two people were killed Monday morning in an apparent murder-suicide inside an elementary school classroom in San Bernardino, California.