The Rich Are Different, and It Matters

Let’s start by focusing on the income of the top 1 percent of Americans, compared to that of the top 10 percent. As of 2014, a household needed an annual income of at least $423,090 to be in the first group, about 3.5 times the threshold for the second group, according to data compiled by the economists Thomas Piketty and Emmanuel Saez. That’s close to the largest difference on records going back to 1974, with one exception: The gap was bigger just before the recession of 2007-2009, during which it fell sharply. Here’s a chart:Now let’s look at the top 10 percent of households. As of 2014, the minimum income for the group was $157,479, according to the Census Bureau. That’s about 2.9 times the income of households in the middle of the distribution. This measure of inequality has grown more or less steadily over the past four decades, with no pause for the recession. Here’s a chart: 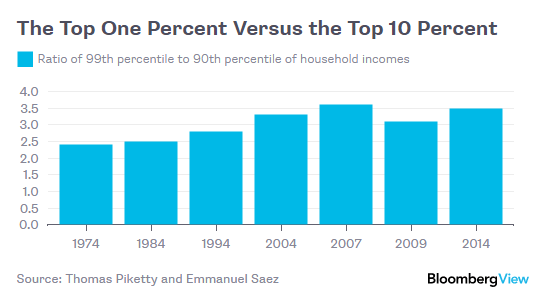 Source: The Rich Are Different, and It Matters