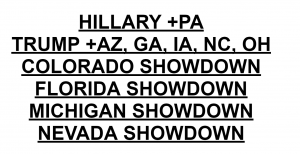 The first results of exit polls on the elections in the United States: who wins in different states (updated).The first results of the counting of votes in the elections in the US in 2016: how to vote citizens of different states and who wins the presidential race – the first to learn of Korrespondent.net in the night of November 9th.According to the first results of exit polls, US presidential candidate from Democrats Hillary Clinton ahead in Pennsylvania and thus is gaining over its rival Republican Donald Trump, according to Drudge Report.In this Trump is ahead in states such as Arizona, Georgia, Iowa, North Carolina and Ohio. Currently tight battle for victory is in Colorado, Florida, Michigan and Nevada. In these states, it is unclear exactly who will win. If you plan to vote in the states of the results of exit poll on the interactive map, it gives Clinton 252 electoral votes, and Trump – 230 votes.